The Mental Health Conundrum: Is CBD The Answer?

Mental health is as important, if not more so, than physical health, yet it has gone largely ignored for far too long. Since it’s not visible and can bring on a peculiar set of symptoms, illnesses like depression have not received the attention that they warrant. And the lack of public understanding of such conditions has compounded the problem.

Unfortunately, recent data shows that Americans are not getting any happier, falling from 14th to 18th in the 2018 World Happiness Report, which mentioned depression as well as the opioid crisis – as of 2018, opioid overdoses are the cause of more than 50,000 US deaths per year.

However, new treatments may be on the horizon, as research into substances that have been prohibited for decades picks up. This has been incredible for the profile of cannabis, which is now recreationally legal in 30 states and medically legal in nine. The studies into various cannabinoids and the endocannabinoid system (ECS) have built significantly on our understanding of how the herb affects the body. We know that it’s not a single entity, but a plant of several hundred compounds (more than 100 of them cannabinoids) which induce vastly different reactions.

Why CBD is better for mental health than THC

Nowhere is the stark divide more apparent than with the properties of cannabidiol (CBD) and tetrahydrocannabinol (THC). Both are cannabinoids but impact the ECS uniquely. THC is a psychoactive substance, and that’s why taking it triggers mind-altering effects and, for some users, mild visuals – although it should be noted that not everyone experiences a strong reaction from THC. In contrast, CBD does not have psychoactive properties, besides helping to boost mood.

Since CBD does not intoxicate, the focus is fully on how it can have therapeutic influence, and this makes it an intriguing chemical for mental health research. Studies have found that CBD even suppresses the potency of THC, by suppressing the responsiveness of the CB1 receptor – to be technical, CBD is a negative allosteric modulator of it. This receptor regulates mood, and both THC and the natural endocannabinoid anandamide (known as the ‘human THC’) bind to it.

This finding suggests that CBD is a useful anti-psychotic, an area where novel treatments are required since existing drugs are known to cause sleepiness, restlessness and sexual troubles. CBD does not cause these strong side effects – in strong doses, it can be quite sedating. It’s rather ironic that a compound from cannabis may be key in treating psychosis and schizophrenia, since the herb has often been criticized for triggering these conditions.

While some enjoy good times on recreational cannabis high in THC, the effects can be very unpredictable due to their psychoactive nature, and other factors play a part in the experience. For example, being high on THC in an unfamiliar setting may be jarring and magnify any feelings of anxiety or paranoia. If using high-THC cannabis to improve mood, it’s advised to moderate consumption and to only take it in a comfortable environment.

CBD as a practical and effective anxiety remedy

Selective serotonin reuptake inhibitor (SSRI) drugs are often prescribed for anxiety, but it doesn’t help that they can take weeks to work. This psychologically paralyzing disorder tends to have very acute symptoms, which can arise unexpectedly and be very severe. In the long run, the condition can create unhelpful neural pathways that impact quality of life, such as worst-case scenario thinking. This sort of negative mindset is restricting, and often leads to missed opportunities.

While mental work like meditation and cognitive behavioral therapy are recommended to bring the mind under control, anxiety also causes chemical changes in the brain which can be addressed with CBD. GABA is the chief inhibitory neurotransmitter in the central nervous system, and helps to boost mood, reduce anxiety and treat attention deficit-hyperactivity disorder (ADHD).

GABA blocks nerve impulses, which go into overload during a spate of anxiety, as the brain produces an increased number of thoughts. GABA works by binding with GABAA receptors – CBD is a positive allosteric modulator of these receptors, and therefore promotes an uptick in these connections, which calms the brain and quells overactivity.

When a person is suffering from a panic attack, the brain produces thoughts at a rapid rate. For the treatment to be worthwhile, symptoms need to be reduced quickly. With tablets, this tends not to happen as they must be ingested and metabolized before reaching the brain. However, CBD can be vaporized, with CBD vape oil and e-liquid. Vaping is an excellent method of medicating as the risks to the lungs is much less than with smoking, and the benefits are apparent in just a handful of minutes. The cannabinoids skip the metabolization phase, passing directly into the bloodstream through lung tissue, where they are then transported to the brain.

Therefore, many anxiety patients like to keep some CBD vape juice on hand, to snuff out any potential anxiety attacks. This can be especially helpful for those with social anxiety, who can medicate before entering an intimidating scenario. A reduction in anxiety does not only increase personal comfortability, but it also allows people to engage more freely in conversation, as they are not weighted down with self-consciousness.

CBD and depression: two ways the cannabinoid is effective

There is plenty of optimism that CBD may be more effective at treating depression than SSRIs, working faster and providing more sustained effects, with fewer doses and sans the nasty side effects.

Firstly, CBD has been found to encourage higher concentrations of endocannabinoids in the ECS, including anandamide. The more that this neurotransmitter binds with CB1 receptors, the happier we feel. This effect is noticeable during exercise, when anandamide rushes to the brain, inducing a pleasant, euphoric sensation – hence why some people become addicted to exercising!

However, this effect can also be replicated by consuming CBD. Instead of creating more anandamide, CBD inhibits fatty acid amide hydrolase (FAAH), an enzyme that breaks down the neurotransmitter. FAAH is known to rapidly degrade anandamide, which is pretty much why the endocannabinoid’s mood-changing effects are not as potent as those of THC.

Sustained mood benefits are more likely with edibles and CBD capsules, while short-term perks are better administered with CBD oil and vape juice.

Brain scans have enabled scientists to discover that depression is not just caused by chemical imbalance, but by actual structural changes to the brain in areas responsible for emotion, such as the hippocampus and the prefrontal cortex. Neuronal circuitry can become damaged, and this also increases the risk of Alzheimer’s– studies have linked the neurodegenerative disease to hippocampal atrophy. Therefore, the long-term implications of this form of depression are particularly bad and require a novel form of treatment.

CBD and some other non-psychoactive cannabinoids are anti-inflammatories, antioxidants and neuroprotectants, and can even restore neurogenesis – this is the process where new neurons are generated by neuronal stem cells. Two significant studies have come out in recent years: one showed that regrowth in the hippocampus could be stimulated by CBD and cannabichromene, in the brains of rats.

The other, conducted by Brazilian researchers in 2018, found that damage to neuronal circuitry in the prefrontal cortex could be repaired with CBD. The CBD produced benefits from the first dose and were still noticeable for up to a week after treatment ceased. This study was also carried out on rats.

The next logical step is for this research to be done on humans suffering from depression, with the overall antidepressant effect viewed in comparison with SSRIs. With these drugs being released in the 1980s and still the doctor’s first choice treatment for depression, it’s clear that mental health research needs modernizing. And this may begin with further study into CBD. 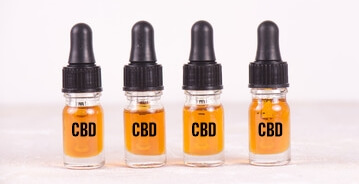 There may finally be light at the end of the tunnel for patients with debilitating mental health conditions. Endocannabinoid system science and the new concept of brain inflammation instigating mental illness is changing how we look at various disorders, and bringing fresh treatments to the fore that interact with different mechanisms in the body.

Indeed, many people are already trying CBD to curb their anxiety and alleviate depression. It helps that the substance has been declared non-addictive by the World Health Organization, and also that tolerance isn’t as much of an issue as it can be with THC. Hopefully more progress will be made in the short to mid-term future.

About the Author: Elliot is a very curious individual who spends a serious amount of time researching just about anything that catches his interest. We never know what he will write about next … But be assured, it will be both timely and informative!

The body of #medicinalcannabis research is growing

Projections from Statista estimate that #cannabidi

Cannabidiol’s popularity isn’t limited to the

#Testing has become a fundamental part of the #can

When it comes to the therapeutic potential of cann

While you can always include cannabidiol (CBD) to

A recent article in the Forbes described the Delta

The 21 a years old student from Thailand, Sirinda